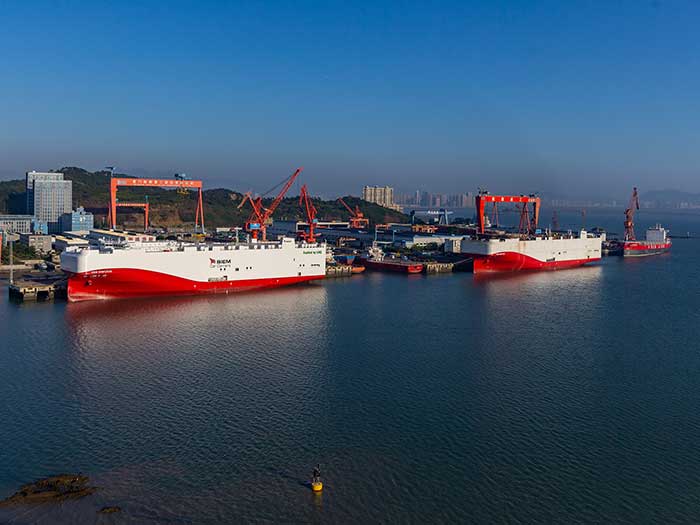 Owned by Kristiansand, Norway, headquartered Siem Car Carriers, the ships will certainly change 2 of the 9 traditional hefty oil-fueled freight ships presently utilized by Volkswagen Group logistics on the Atlantic in between Europe as well asNorth America Each 200 meters long as well as 38 meters vast PCTC will certainly have 13 vehicle decks as well as a capability of 7,500 RT, which represents roughly 4,700 cars of the Volkswagen Group design mix.

Each ship will certainly be powered by a GUY B&W S60ME-GI (-Gas Injection) dual-fuel, two-stroke engine providing 12,600 kW, with straight shot as well as exhaust-gas therapy to additionally minimize exhausts.

Each vessel will certainly additionally have 2 9L28/32DF as well as one 7L28/32DF dual-fuel supporting engines. These are the extremely initial L28/32DF devices accepted for Tier III procedure without SCR (Selective Catalytic Reduction), in addition to being the initial to be developed by Chinese licensee, CMP. Furthermore, the 7L28/32DF engines are the initial to be integrated in a 7-cylinder variation. All GenSets are turbocharged by private GUY TCR 16 (for the 9L28/32DF devices) or TCR 18 (for the 7L28/32DF devices) turbochargers, with the whole set up managed by GUY’s exclusive SaCo S engine-control system.

Each vessel has a four-bladed GUY Alpha dealt with pitch prop of the highly-efficient Kappel style. The props have a size of 6.95 m as well as were created by GUY’s prop licensee, Dalian Marine Propeller Co., Ltd., in China.

Both ships will certainly be outfitted with 2 1,800 cu.m LNG containers set up listed below deck

Bjarne Foldager– Senior Vice President, Head of Two-Stroke Business at GUY Energy Solutions– claimed: “Our dual-fuel profile can appropriately be thought about as fully grown innovation with recommendations currently in every significant aquatic sector. With 2020 as well as the brand-new IMO exhausts regulations quick coming close to, our dual-fuel engines remain to function as common holders for eco-friendly, trustworthy propulsion innovation with their smooth changing in between gas as well as removal of methane slip.

“With well over 400 sales already amassed by MAN Energy Solutions’ entire portfolio of dual-fuel engines – all running on clean fuels such as methanol, LPG or LNG – these car carriers mark yet another milestone in the development of the dual-fuel market segment and cement the success of the strategy MAN Energy Solutions has laid over the past decade. The machinery we have provided for these vessels also fits with our desire to increasingly become a supplier of complete propulsion solutions.”